Guest Blog Spotlight: Dressage Lesson – How to Utilize your Tongue for Extra Momentum, presented by SmartPak

This guest post was provided by the DIY Horse Ownership blog. If you’d like to be featured in our Guest Blog Spotlights, please email [email protected]

Nilla’s tongue was out in full force for our weekly dressage lesson. Here it is literally bouncing through the air with every canter stride.

It’s honestly kinda disturbing. Let’s zoom in on this:

And yes, I know my leg moves way too much. I spent many years playing polo and riding very high strung jumpers that could not have leg on at all. Dijon also can’t have leg on at all. I’m working on solving this, but it’s not easy to undo years or instinct/muscle memory. I honestly think it would be easier if I didn’t know how to ride than because I wouldn’t be fighting a 20 year old habit; I’d just be learning the correct way to start.

It’s not just canter that the tongue pops out in either. 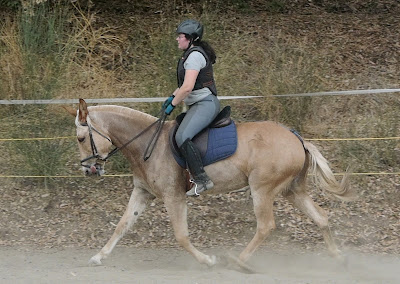 Aside from tongue issues, the lesson went really well. Nilla is really starting to step up into the bit. And she’s starting to really extend out as well. 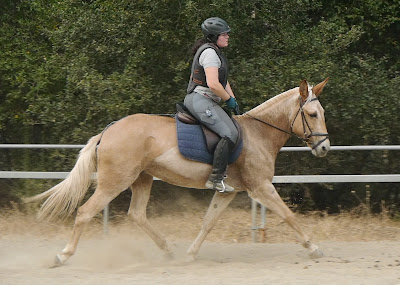 This is still a very new skill so she picks her head up a bit to do it, but you can see her stomach muscles there as she really lifts herself, so she’s not really hollowing with lifting her head.
Nilla is a mule so when she’s with you, it’s awesome; but when she doesn’t want to do something, it becomes a huge battle. Mule riders will tell you that if you get into an argument with a mule, you’ve already lost.
One thing Nilla has decided she wants nothing to do with is any work with the trainer on the ground. The trainer has been doing some work walking and running alongside us with a crop asking Nilla to use and lift her hind end instead of just plodding along with it. A bit like piaffe training, but we’re not doing piaffe.
However, Nilla basically sees the trainer coming and tries to run away. She either barges through the reins and giraffes or flies sideways. Our arena is lined by a hill on 2 sides and she has tried to climb it sideways with me on her. The trainer’s comment (to Nilla) at this point was, it’s a good thing your owner is such a good rider because I’m not stopping. The trainer isn’t even hitting her with the crop, just being near her pointing it and Nilla loses her mind about it.
As annoying as her behavior is, the moment she really gets it and really engages her hind end, we go off around the arena and it’s the best work I’ve ever had out of her. So it really does work. She just hates it. 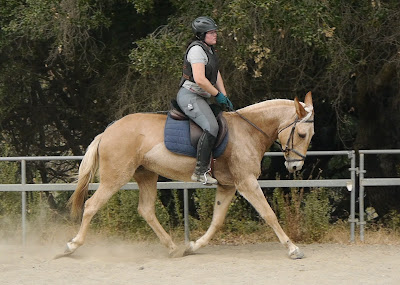 I seriously love everything about her in this picture. Nice lifted back, lowered neck, and real stretch through the gait. She’s really trying so hard to do everything right. She’s not perfect, but even the trainer kept exclaiming how much she was trying. Such a good mule. Sometimes. When she feels like it.