I Bit the Bullet. I Went to a Horse Show, Presented by The Clothes Horse

I went to a horse show. Which I’ve done before. To watch other people show. Usually my kids.  Or professionals. However, this time I was the one that horse showed.  Me. On Indy.  The two of us together.

To give you an idea of what a BIG DEAL this is, let me share this factoid with you: The last time I horse showed was on the Sainted Mare almost 4 years ago.  So yeah, there was a lot of rust to shake off.  Like a 1963 Chevy pickup truck that’s been left unloved in the back yard for 30 years worth of rust.

I’ve waited almost 2 years to show Indy because when I got him he hadn’t had a lot of experience and tended to get a whopping case of Baby Brain/ADD at shows (BBADD?? Bwahahaha!)  So, being the excellent mother that I am,  I let my daughter show him, as Sophie’s a better rider and bounces better than I do.  (Ah yes, a true Mother of the Year moment right there).

In Indy’s defense, we don’t have a big show budget so we typically don’t get to show much, so it’s not like he goes to a lot of shows and should be used to them by now. He has been getting better and better each time we do get out, though. (Thank you, Sophie!) Earlier this spring my trainer showed him and Indy was a rock star and champion in his division.  As it seemed my youngter was starting to grow up I figured that maybe it was time for me for me to put on my BGPs and take a crack at showing myself. 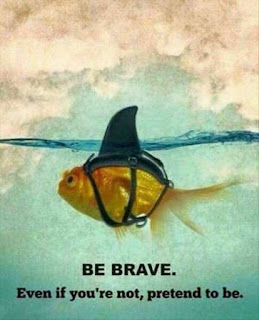 When the fateful weekend arrived my son Noah and I packed up the HMS Valium (my trailer) the night before just to make sure we had everything in order.   I prepped my show bag and then checked it 5 times to make sure I hadn’t forgotten anything.  Shirt, jacket, breeches, belt? Yep.  Ibuprofen? Check.  Extra contact lenses? Check. Sunscreen because I’m a pasty white chick that burns easily? Yep.  Band-aids? Tums and Imodium in case of gastrointestinal distress?  Yes and Yes.  Valium? HELL YES! (Hey, Indy gets his Perfect Prep, I get mine).

I set two alarms for 4AM, even thought I always wake up every hour on the hour when I know I have to be somewhere.  I visualized my rounds, which I found difficult because I didn’t know the courses.  Yes, I’m insane.  Of course I didn’t know the courses and my stupid mind gets hung up on the fact that without knowing I can’t visualize accurately and then I have an internal dialogue telling myself it doesn’t matter and to just make one up for the love of GAWD! (If you’ve ever seen the Lord of the Rings movies, picture Gollum talking to himself. Seriously, that’s how my mind works. It’s exhausting.)

Thankfully when we got to the show there was plenty of parking where I could park head-in and drive straight out (because I’m still neurotic about backing up). I got my number and by the time I got back to the trailer it was time to get on and school.  We schooled, looked over the courses, and before I could overthink things my trainer shoved me into the ring.

Me when I don’t need to back up the trailer

I biffed the first fence.  “Well,” I thought, “got that out of the way! Might as well kick on and see what we can get from here.”  The rest of the course actually went pretty well, except from the flyer on the way out of the diagonal line.  I came out of the ring and my trainer was smiling ear to ear and bouncing up and down with excitement.  “That was awesome!  I’m so proud of you!”  I laughed because of course it wasn’t awesome, but it was a pretty decent start. We briefly covered the ‘learning moments’ from round one, planned the next course and then he shoved me back in the ring.  (Smart man – he knows not to give me time to overthink things).  The second round went less well than the first but I came out of the ring smiling anyway. “Not what we hoped for but we still got around in one piece!” was what I said to my trainer.  He didn’t seem fazed by my mistakes at all. Quite frankly, I think he was so excited and proud that I was finally horse showing my actual performance didn’t matter.

Indy was being such a good boy despite my mistakes, no tension or ADD moments, just doing his job and taking care of me.  Our last round was fabulous.  I mean, it was the kind of round I’d dreamed of having.  Was it perfect? No.  But it was smooth and we did the numbers and the right distances showed themselves and I think I smiled the whole way around. When Indy and I left the ring the smile on my trainer’s face made the day for me.  “That was wonderful! Amy, you should be so proud of yourself!  Look what you did today! You haven’t shown in years and you came out and you rode so well!”

Our last round. (Apologies for the finger).

After we finished it was my son Noah’s turn to ride Mooch in the 3′ jumpers.  There were a lot of entries in the class, so it took forever.  Shortly after their first round Indy let us know he was ready to go home.  He started loudly voicing his displeasure and we could hear his hollering all the way up at the jumper ring.  He started with the occassional whinny, then the frequency and decible level gradually increased. I went to check on him, offered him water, gave him a treat and fussed over him a bit, and then turned to go back to Noah and Mooch.

I got about 10 feet from the trailer when he shrieked again. “Mom-mmeeeeeeeeee! Don’t go! I’m bored!”  He hollered throughout the entire second class.  “Mommy! Mommy!  Mom-meeeeeeee! Mom! Momma! Dammit woman, I’m talking to you!”  At some point in the third class he started pawing as well.  And not just regular pawing, but the kind where he brings his leg up until it’s parallel to the floor and then slams his hoof down so hard it sounds like he’s gonna bust a hole in the floor.

So I went back to the trailer again.  He saw me and immediately stopped yelling and pawing, and I swear the little turd smiled at me.  “You’re back!! I missed you! Is Mooch done? Can we go home now? I’m bored.”  I hung out with him, offered him more water, played with him a bit and when I thought he would behave went back to jumperland to wath Noah. I was barely gone a minute before the little booger started up again.

Aaaaannnnnddd that continued until Mooch and Noah finished and went back to the trailer.  He finally shut his gob once Mooch was on the trailer and we were ready to pull out.  By that point I think my ears were bleeding.

On the plus side, Indy seems to have a good understanding of how the actual showing part of the experience should go.  Clearly we’re gonna have to do some serious work on his trailer manners, though.